Accept bookings from over 100 million guests directly on your website

State Bank of India more commonly referred to as SBI, is a Fortune 500 company with a strong Indian and International standing. With a customer base of over 100 million, SBI is the largest bank in India. Moreover, SBI also has strong international presence with 84 offices in 32 countries, which caters to the needs of the bank's foreign and Indian customers. 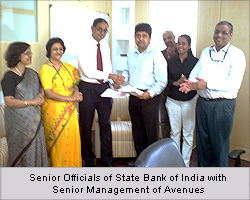 Avenues’ is the holding company for solutions like CCAvenue, ResAvenue and EventAvenue. By adding SBI to its direct debit engine, EventAvenue’s event organizers can now accept registrations and collect payments directly from over 100 million delegates situated in India and around the world.

And, SBI account holders can shop online without a credit card for any type of product and services at 4000+ CCAvenue merchant websites and pay directly through their SBI bank accounts. They can also book hotel accommodation from over 500 ResAvenue hotels located in India and around the world, and book tickets for concerts, conferences etc at EventAvenue’s event organizers websites.

Mr. Vishwas Patel, CEO of Avenues says, "At Avenues, our goal has always been to provide our merchants, hoteliers and event organizers with the latest and best of payment options available. When we started 6 years ago, we only had a single net banking option and today, with 19 banks live and 9 more going live shortly, we can proudly claim to have India’s largest direct debit engine. The addition of SBI to our direct debit engine emphasizes Avenues commitment to provide our merchants, hoteliers and event organizers with cutting edge payment solutions. We are happy to welcome the State Bank of India into the family and we will continue to strive to add to our constantly growing engine.”

About State Bank of India
State Bank of IndiaState Bank of India (SBI) is owned by the Government of India and is the largest bank in the Indian subcontinent. If one measures by the number of branch offices (10,000 + as on March, 2008), SBI is the second largest bank in the world. SBI, the oldest commercial bank in the Indian subcontinent, is also present in 32 countries, where it has 84 offices serving the international needs of the bank's foreign and Indian customers. In recent years, the bank has sought to expand its overseas operations by buying foreign banks. It is the only Indian bank to feature in the top 100 world banks in the Fortune Global 500 rating and various other rankings. According to the Forbes 2000 listing it tops all Indian companies. With an asset base of $126 billion and its reach, it is a regional banking behemoth. It has:- About Avenues
Avenues is a profitable, debt-free company and currently services thousands of eMerchants worldwide through its solutions www.CCAvenue.com, www.ResAvenue.com, www.EventAvenue.com, www.MembersAvenue.com, www.TrustAvenue.com. It is the largest integrated eCommerce solutions provider in South Asia. Avenues has shown revenue growth and profit growth consistently, year on year. Avenues is incorporated in India, and has offices in Singapore, Hong Kong, and USA. The Avenues support and development center is based in Mumbai, India. The total strength of the Avenues team is currently 120 personnel, spanning across all disciplines. For more information, log onto: www.Avenues.info